The 2022 Building Partnerships Conference will be held on September 26 and 27 this year. We are so looking forward to gathering in person, and are thrilled to welcome Dr. Marcia Anderson as one of our keynote speakers. 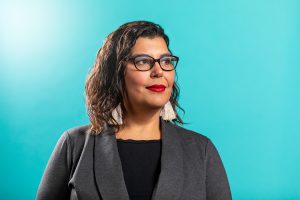 Marcia Anderson, MD, is Cree-Anishinaabe and grew up in the North End of Winnipeg. She has family roots in the Norway House Cree Nation and Peguis First Nation in Manitoba. She graduated with her MD from the University of Manitoba in 2002, and joined the departments of community health sciences and internal medicine at the University of Manitoba August 2007, and in September of 2011 became the head of the Section of First Nations, Métis and Inuit Health.

She is a medical officer of health for the Winnipeg Regional Health Authority, a past president of the Indigenous Physicians Association of Canada and past chair of the Pacific Region Indigenous Doctors Congress and since 2017 has served as executive director, Indigenous academic affairs, Ongomiizwin-Indigenous Institute of Health and Healing. In 2015, following the release of the Truth and Reconciliation Commission of Canada’s final reports, Dr. Anderson led the faculty-wide workshop and the subsequent creation of five working groups to develop the Rady Faculty of Health Sciences’ Reconciliation Action Plan.

Throughout her career Dr. Anderson has advocated for a more robust curriculum in Indigenous health. She was recognized for her efforts in 2011 with a National Aboriginal Achievement Award (now known as the Indspire Awards) and was named as one of Canada’s 100 Most Powerful Women in 2018 by Women’s Executive Network.

Call for Letters of Interest: MNPHA is seeking new board members!